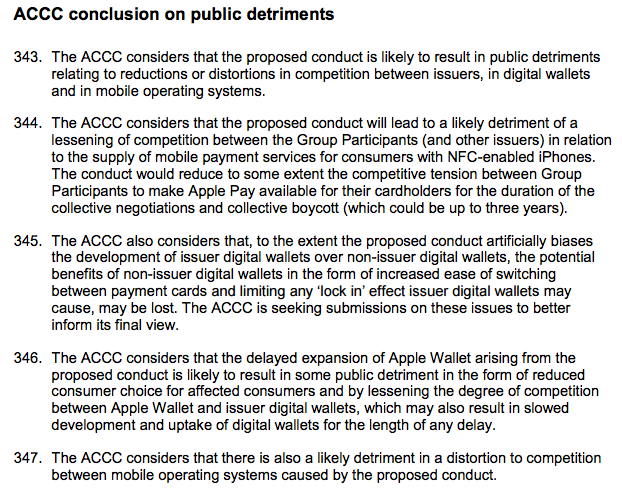 The Australian Competition and Consumer Commission (ACCC) have today handed down a draft finding regarding the application from three of Australia’s biggest banks to collectively negotiate with Apple for access to Apple Pay and the NFC chip on iPhones.

Our biggest banks, the Commonwealth, Westpac and National banks along with some other smaller banks such as Bendigo Banks submitted the application,  seeking permission from the ACCC to act as a “cartel”, that is to negotiate together with Apple regarding access to Apple Pay.

Today the ACCC released its draft finding, which is to deny the application from the banks.

As with all such matters, the finding is now open for review and final submissions before a final decision is made early in 2017.  With that said, you’d have to say the weight of evidence is now against the banks and any potential finding in their favour.

This is a blow to the big banks, unfortunately it’s not over yet and it could still be some time before any customer of those banks are likely to see any movement on Apple Pay for their bank-issued cards.

Submissions from a wide range of individuals and groups (Disclosure: Including myself) were cited in the draft finding, with several individuals determination to switch banks for Apple Pay access referenced.

Consumer feedback has been an important part of the submission process, demonstrating the actual public benefit and views on the process and application.

As it stands, this is not the end, but it’s a major setback for the banks.  The ACCC will make its final decision in early 2017.