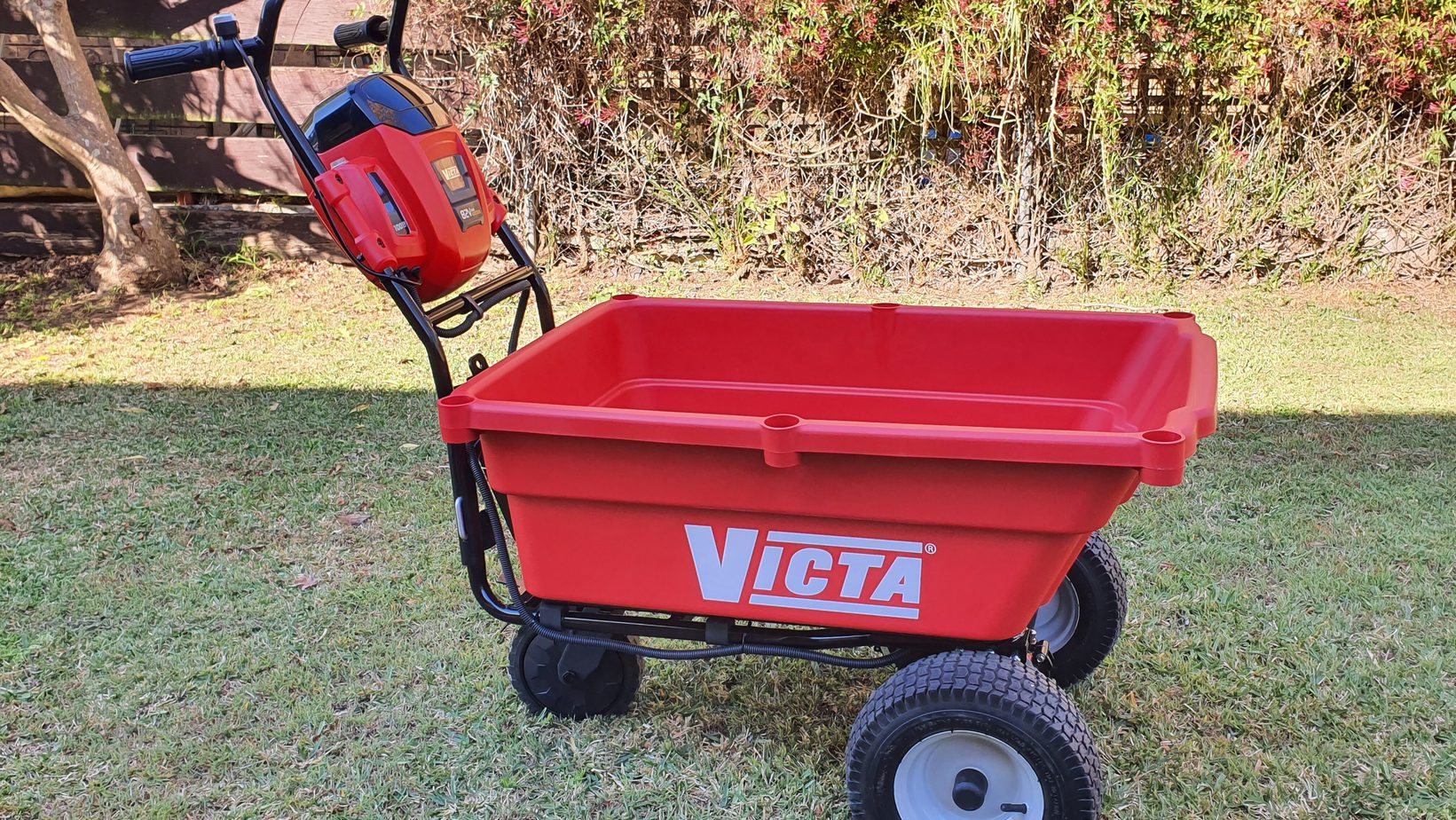 The answer to a question that’s never been asked? Or pure total genius – that’s the Victa Utility Cart.

We’ve all used a wheelbarrow right? Easy to park when empty, Always a challenge to fill either with a shovel or by hand – but its the getting that full wheelbarrow from one location to another that is the tough part.

The single wheel setup has worked for years, and has a real use when a nimble manoeuvre is involved. However, for the very regular taking “this to there” when “this” is a heavy load of stuff – it’s way more than a chore.

Powered on the front dual-wheel axle by a single electric motor, there’s a single rear wheel which turns to direct the cart.

The motor is powered by a booming 82V Briggs and Stratton battery which is placed high up in the handle at the rear of the cart.

Also on the handle is a simple thumb throttle, a forward and reverse switch, and a “fast” or “slow”.

Both speeds are walking speeds, you just have a little skip in your step on the rabbit (fast) speed, while the turtle (Slow) is a lazy walk.

At $799 – it’s not for everyone – no doubt, plus you’ve got to get the B&S 82V battery too which is another $300+, but of course it’s ideal for those garden gurus who already use garden gear with the 82V battery.

When you get “that” over “there” the grip handle (like the brake lever on a bicycle) is down the left of the cart’s bucket for you to release and pull up on a hydraulic lift to tip out your load.

The battery will get you 3 hours of run-time which is plenty for most of the work you’re going to do. My only observation in a limited amount of use is that this thing is made to be electrically powered, it’s a heavy steer without the battery plugged in, so don’t think you can use it as a normal wheelbarrow – though I don’t know why you would!

It can also double as a trailer for your ride-on mower with a hitch folded up into the handle end when not in use.

It’s a concept I’d never heard of – but love the idea of now!

The Victa 82V Utility Cart is very new, but it’s coming to Bunnings and Victa stockists this month!