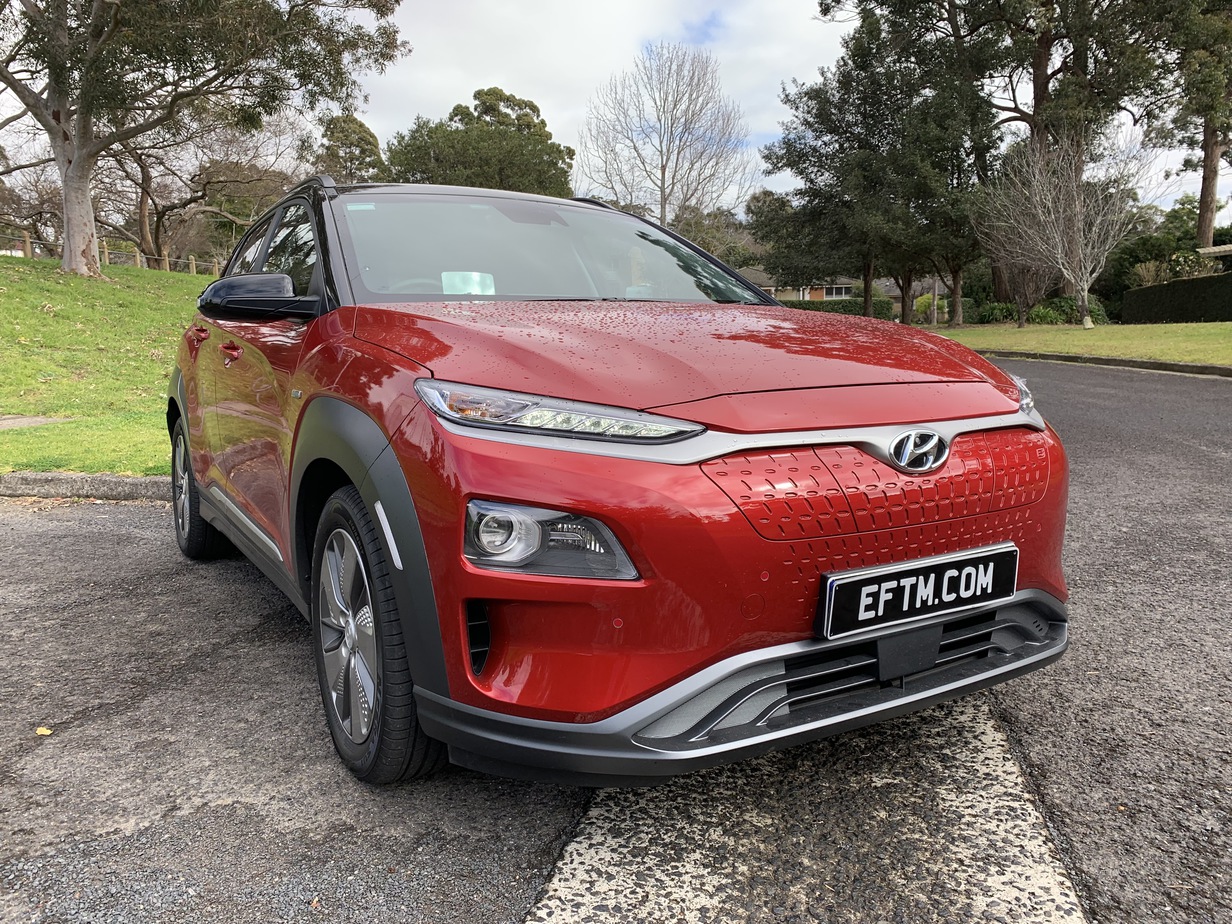 I’ve been thinking a lot about the Hyundai Kona recently, mainly because they seem to be everywhere. They call this cognitive bias, the same thing happened this week when I shit you not, I saw two Suzuki Mighty Boy’s. But surely that’s a fluke, right? Anyway, the Kona must be doing well for Hyundai, but what about the new model that I’ve just driven? The New Kona Electric is a game changer in many ways, but we’re still a fair way from that tipping point that will see people bash down dealership doors to get one.

This as the marketing will tell you is Australia’s first fully-electric small SUV. It’s also an EV car that can go the distance with well over 400km of legitimate range. The thing about the electric Kona is that it gets along like an EV should, with that instant torque shove in the back punch. Compared to the Hyundai Ioniq EV it’s basically a Hot Rod.

The thing is good luck getting your hands on one, with long delivery times at present. Plus, there’s another issue it costs $64,490 before on-roads. Ouch. In fact when you look at the Hyundai fleet, I don’t think you could spend more coin on any other model.

The Highlander model is the range topper in the Kona range, including the electric variant. It does come with a stack of kit, there’s Apple CarPlay and Android Auto via an 8.0-inch touchscreen. Other novelties as you look around the cabin include DAB+ radio, wireless phone charging pad, an eight-speaker sound system and in general a well-crafted premium interior dominated by matte silver finishes.

This is the first electric car I’ve driven since the Tesla Model S that is genuinely quick. There are three drive modes, Eco, Comfort and Sport. However getting power to the ground via the front wheels is a tad problematic, especially in Sport mode.

It’s possible to chirp and squeak the front-wheels in the dry up to at least 60km/h. Yes, that’s when really putting the boot in, but even moderate throttle inputs especially in the wet make for a bit of a wild ride at times.

Aside from that the Kona EV is pretty well sorted, with that typical low centre of gravity EV cars have due to a floor mounted battery pack. Overall, it’s a fun little machine, one that is nudging the door open for what we’re all going to face in the future.

The electric Kona generates 150kW/395Nm making it a real powerhouse no matter what type of fuel powers your compact SUV in this class.

There’s not really a transmission, to put it simply just one gear is required. This allows for a stack of storage space along and under the centre console area, where a transmission tunnel is normally found.

Paddles shifters alter the severity of the regenerative braking across three levels. On its most aggressive setting you rarely touch the brake pedal in normal day to day driving. The Kona’s 64kWh battery pack should see you meet the claimed range of 449Km.

I never felt the need to even charge the Kona, unlike the 28kWh Ioniq that we’d basically charge every day.

In terms of charging we simply used the supplied plug for AC charging at home. You can purchase a Hyundai 7.2kW wall box charger that will fill her up in just under 10 hours. With that in mind I’d imagine the typical domestic socket with an output of 2.2kW would take well over a day to charge from zero. But as with all EV cars, you rarely arrive home verging on running flat.

The Kona can be more rapidly charged by charging stations that offer up to 100kW of power. It has a Type 2 or Mennekes Euro style charging port. This offers three-phase compatibility.

You won’t find too many of those around just yet. Download the ChargeFox app to seek out where their range of 22kW boxes are. As far as I can work out that’s your only hope.

As usual the Kona EV did the rounds of EFTM HQ.

Range anxiety? What Range anxiety – this car removes all concern about where you might make it to and if you can do that extra trip to the shops or the city. Because of the range available, I think I only plugged it in once, compare that to the Ioniq which I plugged in every single night.

Loved the ride, loved the daily drive – but the wheel spin under acceleration is just annoying and it’s not what you’d expect from a $65k car.

It’s probably enough to put me off buying one to be honest, so I’d be looking for the next generation.

The wheel-spin thing is a problem and not because we’re leadfoots. Having said that it’s still a stack more fun than the Nissan Leaf, but it’s also substantially more expensive. It’s the best EV car I’ve driven that aims to reach the masses, but it won’t just yet simply due to price.

There’s no gear stick, just buttons for park, reverse, natural and drive. The instrument cluster is fully digital, there’s a head up display that’s projected onto a piece of plastic rather than the windscreen and as mentioned all the multimedia options you will ever need.

Because your neighbour bought a Nissan Leaf and you want to drag him out of your locality each morning.

This is a tough one, because as I mentioned it’s the best EV car I’ve driven for the masses. But it’s still too expensive and will shred the front-wheels in about a month (if I owned one). But it will go a bloody long way, it will most certainly make it to Bathurst from EFTM HQ. So, it’s an 8.1 out of 10 from me. 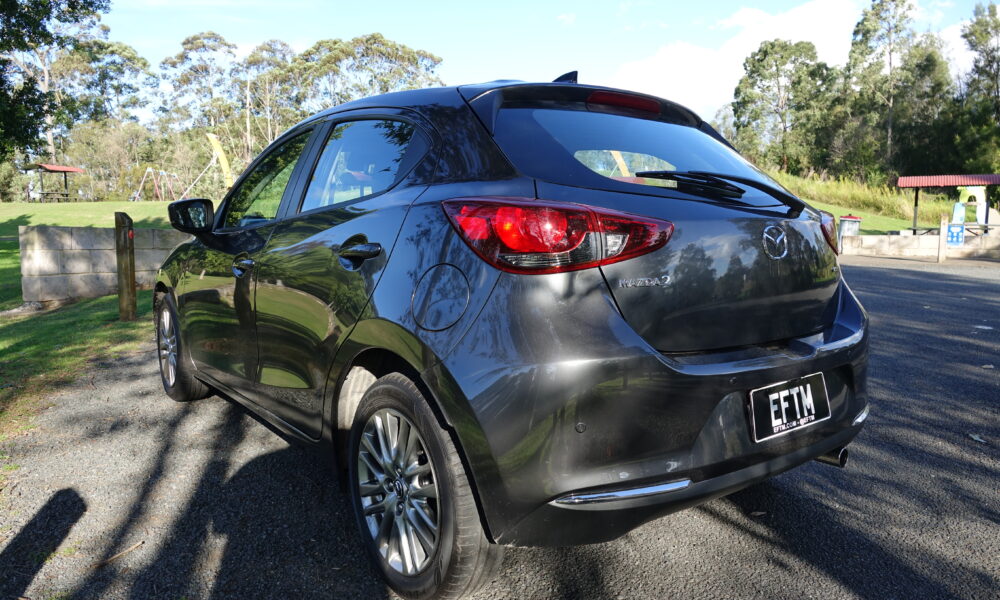 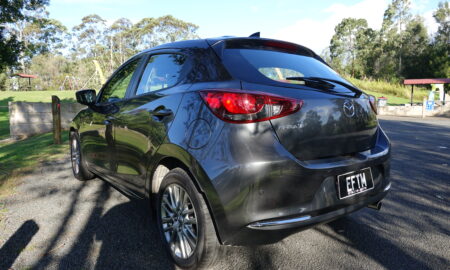