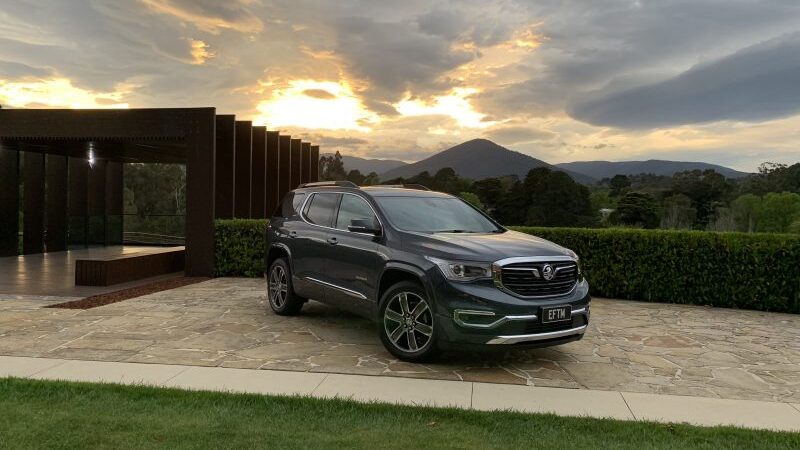 Car safety should be at the top of any buyer’s mind when purchasing a new car. Previously cost prohibitive technology has now found its way into affordable cars. But it’s now a matter of educating Australian customers about what, at times, can seem like trying to understand a foreign language. Holden yesterday hosted a SUV Family Safety Day in conjunction with Kidsafe, to help Mums, Dads and everyone in between, translate some of these mysterious features and more.

In any modern car there are a myriad of active and passive safety measures. As SUVs continue to dominate the sales charts. Holden really wants to ram home the fact that life has moved way beyond a couple of airbags up front and anti-lock brakes.

“Understanding active safety technology is a crucial factor in improving road safety,” said Jeremy Tassone, Holden’s General Manager of Vehicle Development, “yet most people outside of the automotive industry don’t know what these technologies are or properly comprehend the benefits they bring.”

“Safety can be enabled by technology, but it begins with the right state-of-mind. Making safety a priority by approaching even the most basic road trip with the right attitude in terms of safety is another key factor,” Mr Tassone said.

On board are many critical systems you may never need. But just like a smoke alarm in your house, they could one day spring into action and save your life.

Let’s start with active safety features, which are designed to prevent a crash or incident in the first place.

This effectively gives a bird’s eye view of what is around the car, it uses a series of cameras to patch together an image to ensure you have an almost 100 per cent field of vision. This feature is especially important to spot a child, to avoid what Kidsafe call ‘Low Speed Run Overs’. After all a driveway is like a road, so why wouldn’t you be just as alert.

Reversing out of your driveway may sound like a simple act, but what about in a crowded inner-city street. Your view may be obstructed by parked cars. This allows for the camera to literally see around corners to alert you of oncoming cars via visual and audible sounds. \

We have all no doubt bumped into another car while parking. It’s now the norm to have audible monitors both front and back and even graphical guidance systems to visualise just how tight that spot really is.

SUVs come in all shapes and sizes and for some can be difficult to park. While you really should be capable of parallel or perpendicular parking, some vehicles like the Holden Acadia can do it autonomously. At the push of a button the Acadia can enter a mode where it’s able to find a spot and perform the park itself, all you do is control the brake and forward and reverse gear.

All cars have blind spots, which is why we are trained to look over our shoulder when changing lanes. But given we’re all human, inevitably mistakes do happen. The Side Blind Spot Alert is usually a light in the side mirrors, that will flash whenever something is occupying that area of no man’s land. Often many cars will also intervene if you still continue to not pay attention, via some corrective steering input or lights, buzzers or even a vibrating seat in Holden’s case.

This system uses cameras to recognise road line markings. On long stretches of highway, we have all strayed off course occasionally. The system will give you a gentle nudge via the steering wheel to get you back on the straight and narrow. This program can also be turned off, because on a twisty country road it may end up being more of a hindrance than help.

This feature allows the car to read speed signs, so you’re never left in any doubt about what speed you should be doing. Given our roads can often have varied speed zones over just a matter of a kilometre of two, it’s a must have in my mind.

Other features to take into consideration is the connectivity and controls within the car. Especially when it comes to Apple CarPlay or Android Auto. This software really keeps your eyes and hands off your phone with many features showcased via the infotainment display and operated via the steering wheel. Holden has this software standard in every car, let alone SUV, it sells.

Passive safety features include things such as airbags, Holden has six or seven in its SUV range. Autonomous Emergency Braking (AEB) I believe is now a must have. Using sensors and cameras again, AEB will slam on the brakes if you fail to do so. This can prevent a rear-ender and some AEB systems can even detect a pedestrian or cyclist. If a child comes flying out of a driveway chasing a soccer ball, there’s a good chance this system will react before you do.

The overall structure and crumple zones of modern cars is designed to provide a safety cage for occupants, while a modern car may look destroyed in an accident all it has done is disperse the energy away from the cabin. Don’t ever let someone tell you ‘They don’t make cars like they used to‘, because that’s utter rubbish.

Kidsafe is a not for profit organisation that exists to prevent unintentional injuries to children. Shockingly in the “unintentional” category, that also includes drowning, the leading cause of death for children is transport related injuries. Be it, as a passenger or pedestrian, you can see why Kidsafe was formed way back in 1979.

Much of this is because young children haven’t developed appropriate peripheral vision and have an inability to judge where sounds are coming from. Plus, outside of the car you need to remember roads are designed with adults in mind, not children.

But the big one is the incorrect installation of child restraints, more than 70 per cent of us have got it all wrong sadly.

In this day and age, it’s actually not that hard to correctly fit a child seat. Since the invention of ISOFIX anchors, fitting a rearward or forward-facing seat has become a dream, trust me I know, as a motoring reviewer I move my two-year old’s seat several times a week.

ISOFIX anchors are found either side of the base of the vehicle’s rear seats. They connect to secure straps on the base of the child seat. In Australia the use of a top tether is still required, and this is where many atrocities occur.

Kidsafe reports tethers being too tight or loose, twisted, wrapped around head restraints or even luggage straps.

The key to ensuring your child is properly secured is not what the law says, but what size they are. As parents we forget how quickly they grow, every two months you should be looking at the visual indicators found on all child seats. Constantly maintain and check the straps and move them up as required, slide two fingers in between the harness to ensure it’s not overly tight but secure, plus during the colder months remove bulky winter clothing, this hinders the seats performance by creating air gaps.

These videos are all available on Holden’s YouTube channel.