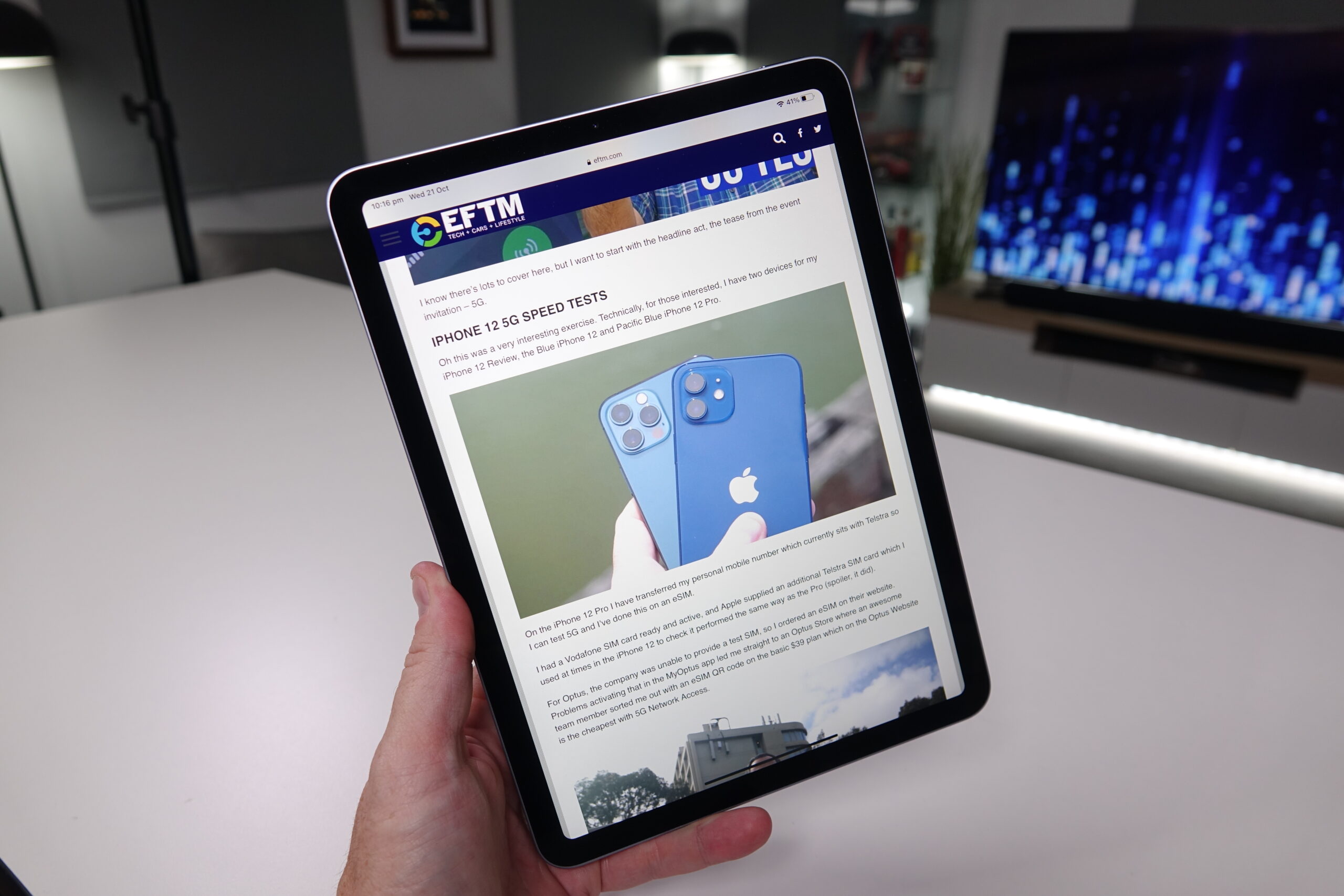 I’ve never really understood the position of the Apple iPad Air in the total iPad lineup. Frankly, it’s looked and seemed the same as the basic entry-level iPad. Until now. This is my iPad Air review.

2020 feels like the year when Apple let the iPad Air graduate and really stand out among its siblings in the range.

Available in five colours, including a green and blue for the first time, when offered the chance to review it I was never going to opt for Space Grey, Silver or Rose Gold was I?

In fact, as it happens, I now have a Blue Apple Watch, Blue iPhone 12, Blue iPhone 12 Pro, and Blue iPad Air – sensing a theme anyone? And that’s not just saying Trev likes Blue – that’s saying Apple sees market share in the colour blue.

And I really think people will buy this for that fact alone.

An iPad mini, despite being the smallest iPad, is not the cheapest. That crown goes to the 8th Generation iPad at $499. Then comes iPad mini at $599.

iPad Air steps things up a notch at $899 thanks to it’s screen, design and power along with Apple Pencil generation 2 support.

But then it gets interesting. iPad Pro starts at $1,329 – I’ve no real clue why you’d buy that with the iPad Air on the market. Sure it has a LiDAR scanner and wide angle lens, plus a whole lot extra storage (if you pay more).

iPad Pro caters to the original market for Macs. The designers, the video editors, the true professional user.

But the iPad Air is almost exactly the same size, screen and features as the 11 inch iPad Pro, in fact it’s more powerful with the A14 Bionic Chip.

Now that’s oversimplifying gone mad, I get that, but in simple terms, the iPad Pro 12.9 inch I get, big screen, workhorse.

But throw the iPad Air into the Magic Keyboard and hey presto, you’ve got a powerful laptop replacement.

Great performance, the camera is great (but please refrain from using an iPad for photos, please – AR is fine, but not photos), I can’t see anyone complaining.

But here’s the kicker -no FaceID – booo, sad. NOT.

This thing has TouchID. I know Face ID is remarkable technology, but TouchID fingerprint scanning is quicker, easier and its implementation on the power button here is brilliant.

It is a stretch at $899, I get that, the standard iPad will suit many in fact most people at just $499 – but for the style, the colour, and that real boost in performance, I’ll take the iPad Air thanks!

The real question is how the hell does Apple spec up the next-generation iPad Pro because it needs to be mind-blowing to stay competitive with this little Blue fella in the market.