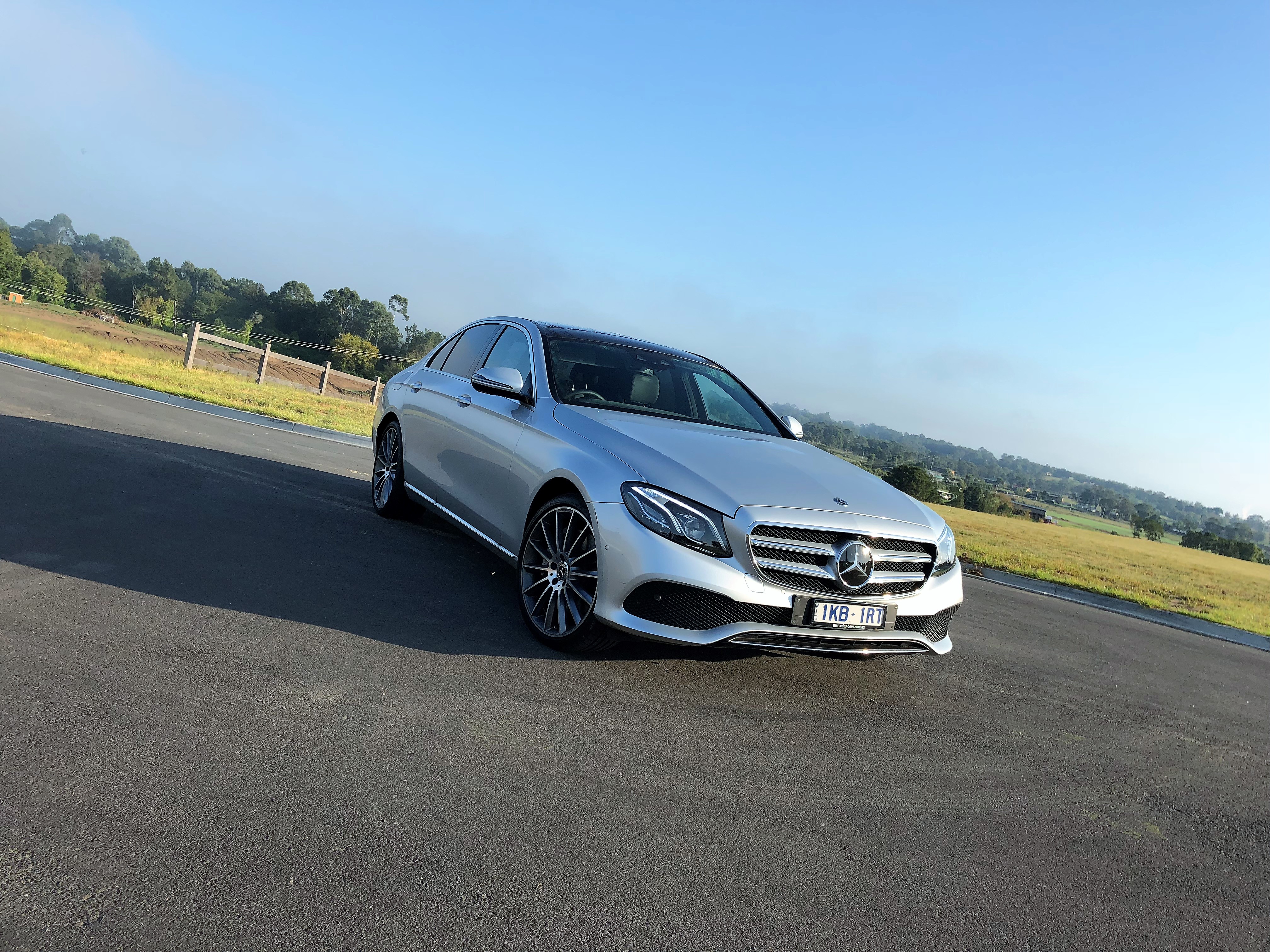 As far as European full-sized sedans go there’s two that having been going head to head for ages now. The BMW 5 series and Mercedes-Benz E-Class may sit in the shadow of their 7 Series and S-Class flagships, but each still play a lead role in the ultimate luxury, prestige and technology stakes. The Mercedes-Benz E-Class sedan is a sophisticated looking pearler that very near mimics the limousine scale S-Class in terms of looks and gadgets. But can it match its direct competitor the suave and dynamic BMW 5 Series? Chris Bowen and Trevor Long took the brand’s latest and greatest sedan for a week of varied driving. Here’s our view of the Mercedes-Benz E400 Sedan 4MATIC.

It’s All About the Badge.

Let’s face it, for those after a dose of luxury the three-pointed star badge is one of the first that comes to mind. Rightly so too, the Germans certainly know how to make a car and the E-Class has a long and successful lineage to back up such a purchase. The car exudes perhaps the most dramatic presence found in this segment. It’s just a beautiful car from every angle, so much so it needs the appropriate home and driveway to match. While certainly a large car, the company has managed to craft a vehicle that blends sophistication while still looking a little edgy. Owners of the flagship S-Class must surely baulk at the near identical E400 4 MATIC. 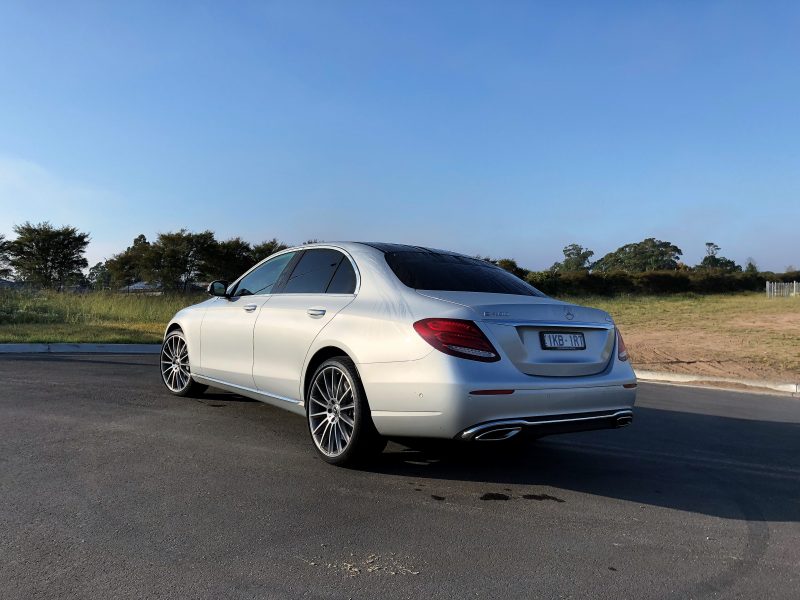 What Do You Get?

The E 400 4MATIC arrived late after the initial 2016 launch of the E 200, E 220 d and the E 350 d models. What you score under that enormous, elongated bonnet is a twin-turbo petrol V6 that provides all four-wheels with 245kW at 5250rpm and 480Nm. Outside of the AMG E43 this is certainly the quickest E-Cass with 0-100km/h arriving in 5.2 seconds. All models score a nine-speed automatic transmission. The E 400 MATIC also scores trick LED Multibeam headlights and a panoramic sunroof. But it’s the interior and technology that really impressed us the most. 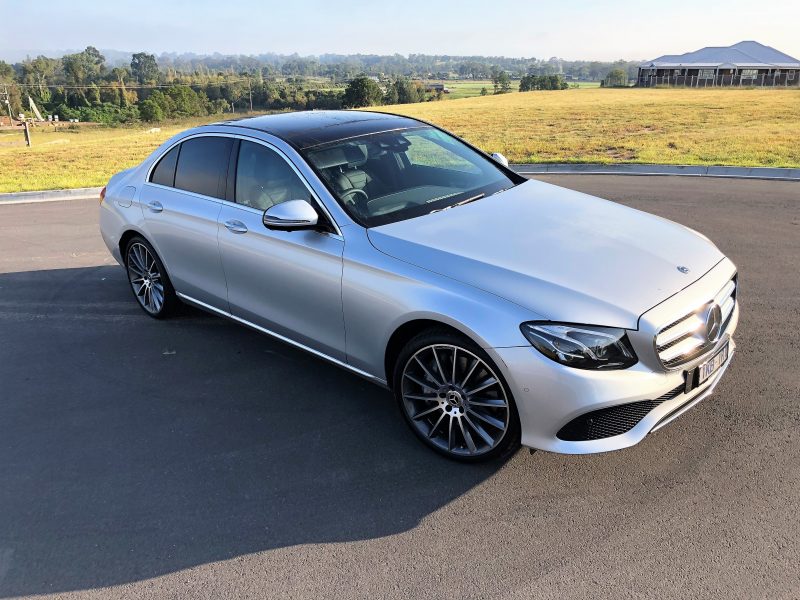 Audi have the wonderful and still class-leading virtual instrument cluster and surgically constructed cabin, BMW have stuck with a somewhat classical dash, but Mercedes-Benz has gone screen crazy up front. There is a twin setup that incorporates 12.3-inch screens side by side, with the one to the left of the instrument cluster acting as the infotainment screen. This creates one high definition glass panel that flows seamlessly across the cabin. It also provides for the largest display of Apple CarPlay we’ve seen, simply glorious although lacking BMW’s wireless connection.

It takes some time to comprehend how the E-Class operates. The interface and level of technology is a little intimidating and led to one of the rare occasions we consulted the manual. For example, there are mini touchpads on either side of the steering wheel, one can cycle through the main centre master screen the other can adjust and alter the instrument cluster styles and open menus.

The COMAND Infotainment system can also be operated via a central dial and once mastered is a crisp and quick way to access just about every conceivable detail you could want. Although quickly tracking back and forward on a music track is still a mystery for me. 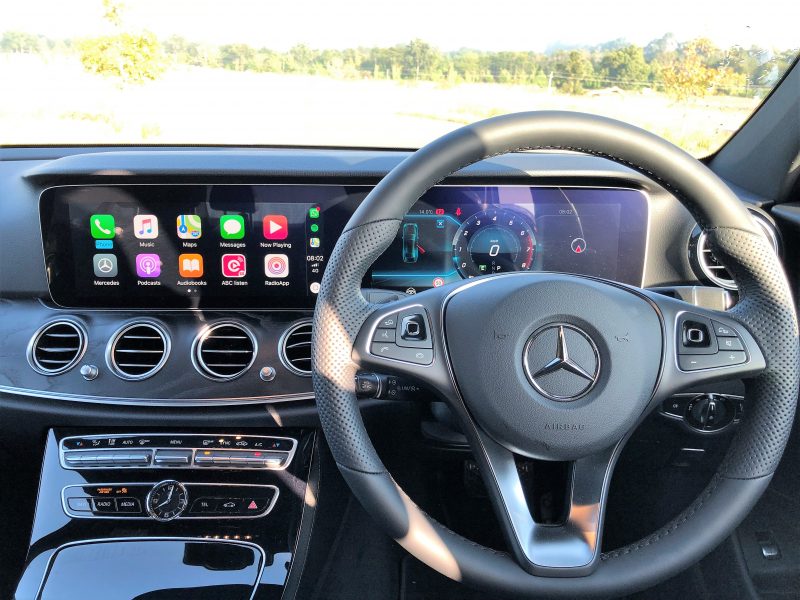 The Driver Assistance package PLUS package that comes as standard allows for the best execution of semi-autonomous driving to date. Tesla may claim their Autopilot system is ultimately superior, but Mercedes-Benz have locked down a program that simply works, every time. While the adaptive cruise control, automatic lane keeping and AEB can be found on plenty of competitors the E-Class combines all of it so smoothly. It makes what can otherwise be unnerving tech, comfortable. It’s also the first vehicle to change lanes off its own bat when holding down the indicator that I truly trust. In fact there is so much driver assistance technology going on in the car look out for a standalone article on EFTM soon.

It’s a very rarefied cabin to sit in, along with being a remarkably hushed drive. With the windows shut you could hold meditation classes inside at 250km/h if our speed limits allowed it. Being the big bopper engine outside of the E43 there’s no hassle getting the beast up to speed. The engine note is far from engaging, instead being restrained. But it is potentially lethal to much more aggressive egos at a set of lights.

I wasn’t overly impressed by the overall ride quality however. Sure, the car sits on 20-inch rims, but ordinary roads do faze the big Merc in a most unceremoniously way. It can cruise along like silk on the highway but feel tormented by rural roads. As a steer it also lacks the try dynamism BMW nail, through corners it lacks a degree of coordination and leaves the driver feeling a little uncertain about its capabilities. This is despite the AIR BODY CONTROL system that automatically adapts to the road surface. But with five different drive modes it’s possible to dial up or down the fun, but just not with the same athleticism as the opposition. 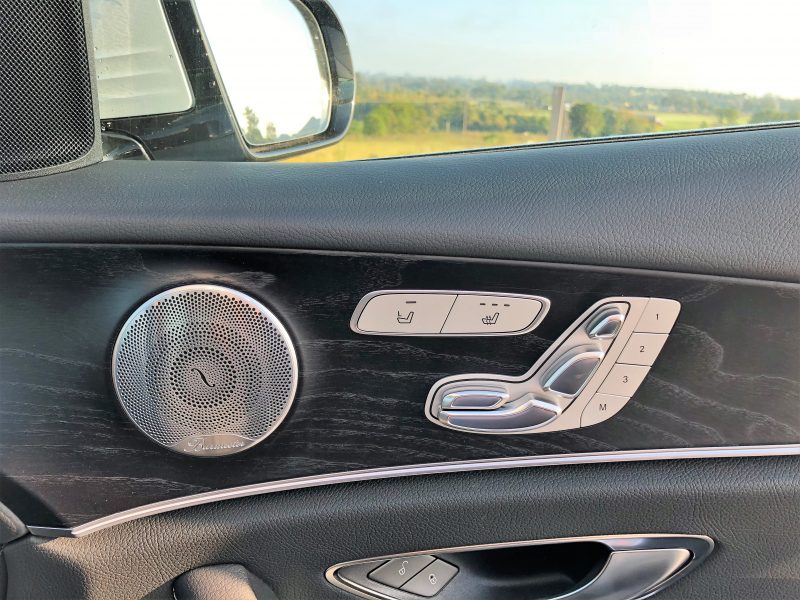 The top of the range E 400 MATIC model tested here kicks off from $139,611. It was coated in standard Iridium Silver Metallic paint and included a black leather interior with ‘Black Ash’ wood trim. You can certainly go way beyond this price point, the options interior wise go on and on. Fuel economy is rated at 8.4L/100km, I averaged 10.1L/100km after a few days of combined urban / freeway driving.

As far as a luxury car goes the Mercedes-Benz E-Class does the job very well indeed. Short of buying a car suitable for the absolute elite like the S-Class, then you are on very safe ground here. As a driver’s car it’s not as focused as a BMW 5 Series, but for making a statement about what you’re all about it’s basically unsurpassable. I award the Mercedes-Benz E 400 4MATIC the EFTM Credit Rubber Stamp of Approval. 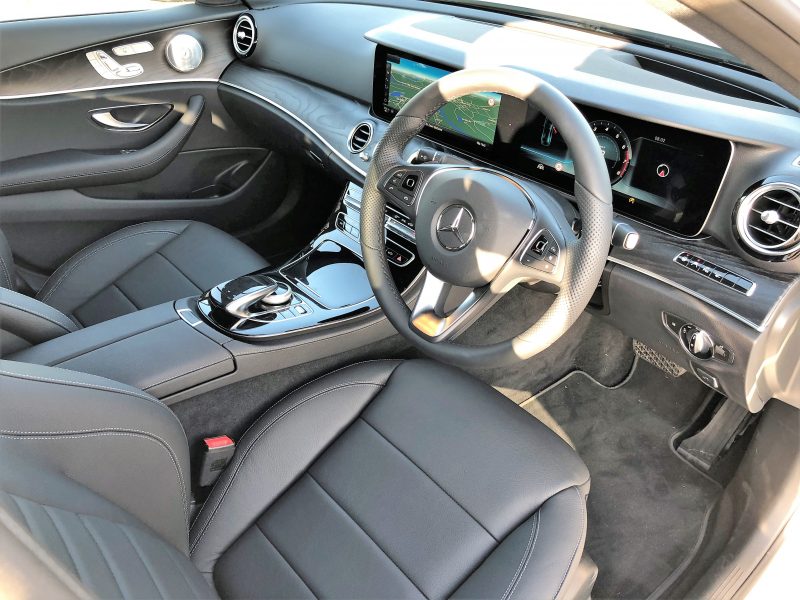