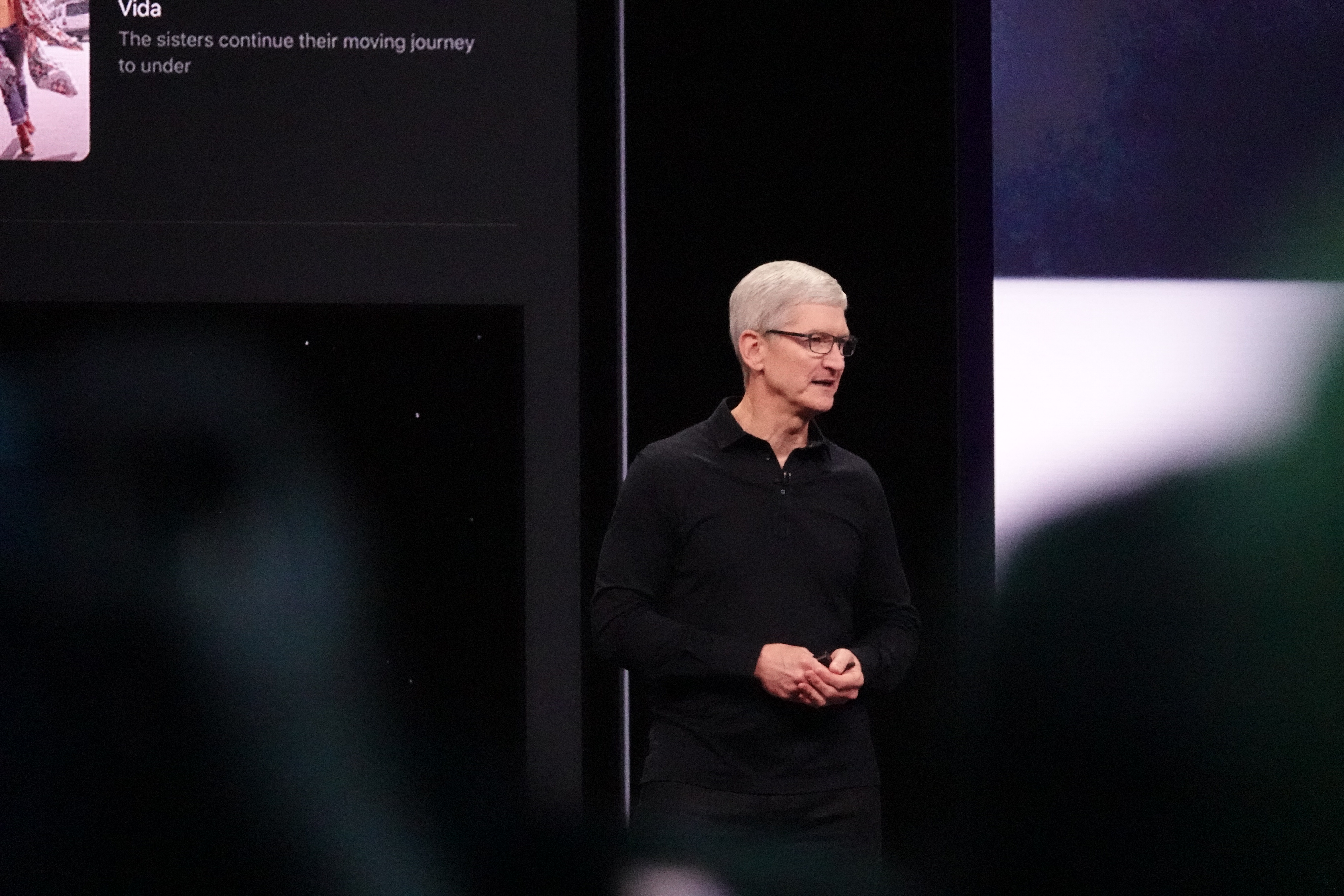 iTunes changes, iPad gets its own Operating System – iPadOS – news from WWDC

The keynote at WWDC by Apple CEO Tim Cook is the biggest event of the year in terms of sheer audience numbers. Instead of a couple of thousand in total, there are 6,000 attendees here in San Jose, with Developers far outnumbering the media.

Mac OS Catalina is the name for the next generation Mac Operating system.

The real headline though is the death of iTunes. Perhaps anticipating the outrage, Apple made the point that iTunes does so much – they joked why not include a Calendar, or Safari in iTunes.

No, instead, they’re making separate apps, one for Music, one for Podcasts and of course Apple TV.

Podcasts can be searched and discovered in new ways, Music is all about your music library and subscription, while TV allows you to see your owned and rented content plus new subscription TV.

Where do you Sync your phone? Easy – that’s in Finder – right with your other external devices.

There’s no word on the future for iTunes on Windows – we’re going to assume until we hear otherwise from Apple that iTunes will continue for Windows for the moment, though you’d expect Music at the very least to get it’s own app sooner rather than later.

On a PC the phone sync via iTunes can’t be replaced as easily by “Finder” so that function would need to be held within either a Music app, or another new specific Sync app for Windows.

The next generation WatchOS (Watch OS 6) creates a completely seperate operating system for the watch as it seeks independence from the iPhone.

The base code for WatchOS now allows for fully independent apps not requiring the companion iPhone App.

This is most evident with the launch of the Watch OS App Store – available right from your watch, you can find, browse, check and download apps without needing your phone nearby.

WatchOS 6 also features a full streaming API which allows streaming of everything from sports to podcasts.

Apple TV’s big updates are really Multi-user support which allows the personalisation of the up next and other recommendations.

New Apple Music support on Apple TV – including lyrics on screen in sync with the music which is a feature also coming to iOS devices. Additionally the multi-user support means it’s all your own stuff, not someone else’s.

Game controller support for Apple TV 4K expands to Xbox One S and Playstation Dual Shock 4 controllers – this is all ahead of the launch of Apple Arcade later this year.

New underwater screensavers in partnership with the BBC Natural History unit, the team behind “Blue Planet,”

Coming later this year, the next big update to the iPhone operating system will be iOS 13.

There’s a huge focus on performance here with this new update with things like FaceID operating up to 30% faster.

Actual apps will be smaller as bundles, making them 50% smaller to get for the first time, and 60% smaller as updates.

Dark Mode is coming to iOS devices, after launching last year on the Mac, Dark mode is great for evening viewing, but also just making it easier on the eye.

Across iOS, you can now swipe to type – Apple is calling this Quick Path – swipe your finger over the letters of the word for it to type. Having just switched from Android back to iOS this is a key feature that Apple has been long falling behind on.

The share popup is changing, with intelligent suggestions of to whom and how you might be thinking of sharing, based on your previous actions.

As with the Apple TV – you will also get Time-Synced lyrics for songs you are playing in the Apple Music App so you can sing along!

Safari will have options for text size and this can be saved based on the site not across the whole app – new rich text options within mail you are composing, and notes gets an update with a rich gallery based view for scrolling through your notes.

There’s been a huge update to reminders, making them far more intelligent and based around the style of reminder you need which should make them less of an annoyance and more of a feature.

Apple announced a Huge advance in Maps, with their own car and plane tracking creating all new mapping data – creating a deep 3d data layer on maps. “Look around” emulates what Google has with their Street View.

Location privacy – “Just Once” is a new option so you can use the location services as you need, but prevent it from tracking you into the future.

Apple is also cracking down on apps sniffing Wifi and Bluetooth to determine your location.

Sign-in with Apple creates an instant account, but if more information is required you have the option to share your email address.

Critically, if you want to hide your primary address, Apple has a “Hide” option – in this situation, Apple creates a completely random address specific to that app, allowing you to delete that address so you can stop hearing from that company. It’s complete genius, that is really quite simple and secure.

An update to the iMessage app will allow you to share your name when you send a message – this means that someone else who you message that might not have your name saved, will see who the message is from – instead of just seeing your phone number.

The Photos app has new editing capabilities allowing simpler editing of your photos, but also the ability to edit video as well – adding effects, but perhaps most long overdue – the ability to rotate a video. Ever started a video holding the phone upright then actually spent all the time holding it sideways – problem solved.

When browsing photos Apple is attempting to remove the clutter from your library – removing things like screenshots from your views, but in a “day” view, removing duplicates and showing just the best of the bunch.

Moving out to “Years” view, Apple is attempting to group photos of an event, location or person so its easy to browse your library.

Homepod can now recognise the user so you can get personalised playlists and favourites – finally – my kids won’t be ruining my Apple Music preferences!

CarPlay gets an overhaul with an all-new look, including a split screen so you have music controls on screen while also seeing your app.

There are also HomeKit shortcuts for things like your garage door opener when you approach home.

Siri is staying out of the way with a simple overlay on the screen rather than taking over the entire screen.

Almost every app has been re-designed for a new look approach, with CarPlay now available in 90% of new cars sold in the US, and 75% of all new cars globally.

Across iOS Siri has been replaced. Well, the voice actors who’s voices have been used to piece together words and phrases – now, using a thing Apple call Neural TTS (Text To Speech) the entire output is computer generated, for a much smoother sounding or natural voice.

This is big, since iPad first launched it has shared the same operating system as the iPhone (iOS) but in 2019 that all changes. As Apple looks to position the iPad as a clear “PC Replacement” device, the changes they are making to the operating system start to distance it more and more from the iPhone.

In recent years the iOS updates have included very specific changes for the iPad such as the dock, recently used apps and the split screen options for apps.

With new multi-tasking “window-like” operations it stands to reason that separating iPad’s OS from iPhone will limit the “bloat” in the OS itself that is just not required on the iPhone.

Some of the very iPad specific features include:

Files – new updated file browsing options, iCloud Drive folder and file sharing, and the ability insert a USB drive and SD Card in to the iPad (Via a dongle if required) and see those files within the “Files” app.

Widgets – the widgets you see in the today view on iPhone are now able to be pinned to your iPad home screen. More apps are able to be shown on the screen too.

Split view is more capable than ever, allowing multiple instances of a single app while making them inter operable, this also works with third party apps.

Fonts can be added to your iPad via the App store

Theres a bunch of amazing new gestures that allow you to perform tasks on the larger screen and for text selection.

Apple Pencil latency has been reduced dramatically from 20 milliseconds down to just 9.

If you want to know what it costs, you don’t need it.

Apple have brought back the Mac Pro – their highest end, extreme performance computer built for the highest end professional applications.

Gone is the dustbin cylinder style Pro, with a fully versatile “Cheese Grater” designed tower which is going to find its home in some of the biggest video and graphics production studios around.

Trevor Long travelled to San Jose as a guest of Apple – I mean, how the hell else would he get there – it’s not like you are paying to read this!

iTunes changes, iPad gets its own Operating System – iPadOS – news from WWDC