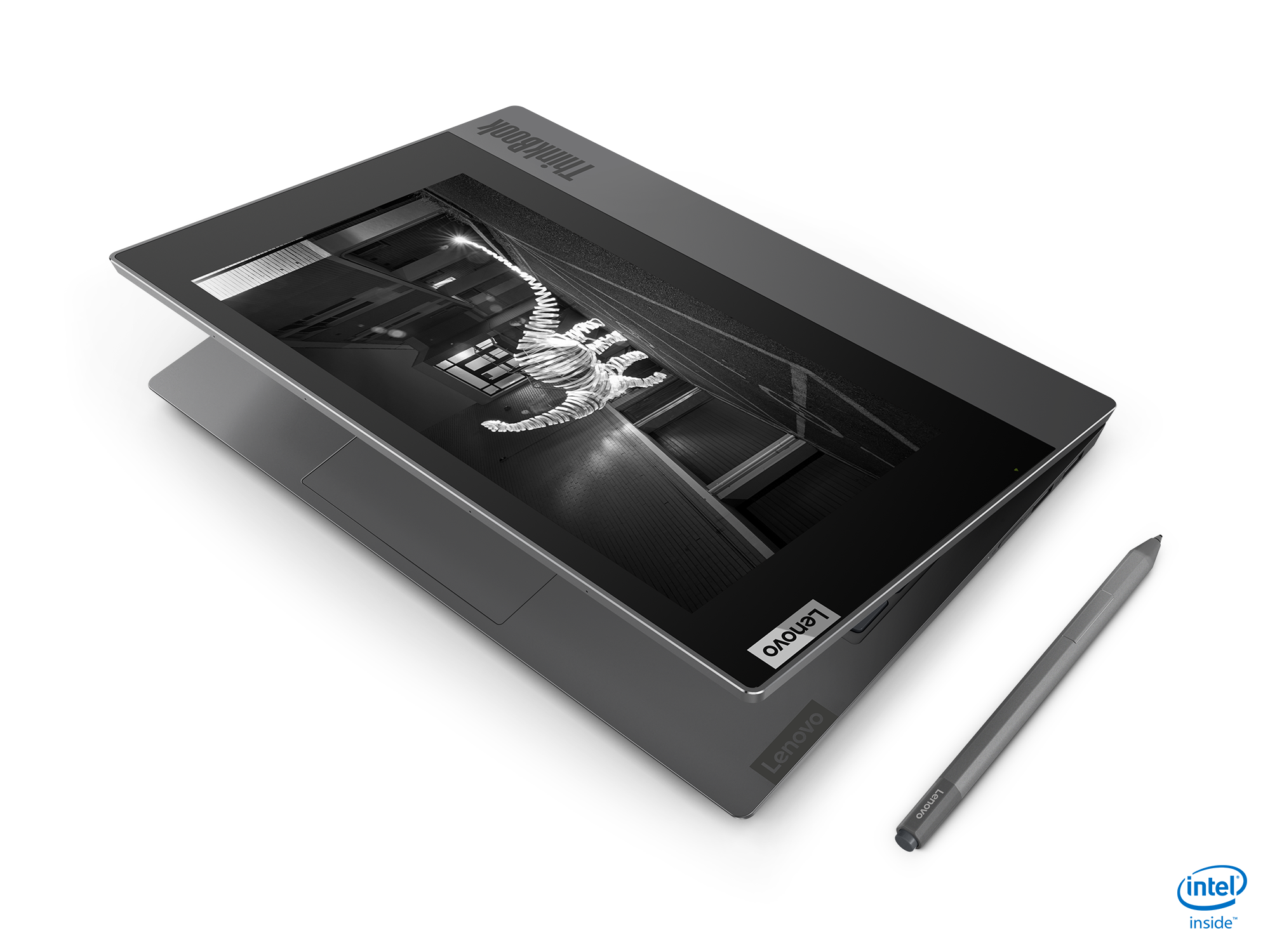 CES is a busy show and Lenovo has dropped another round of announcements with the new Thinkbook Plus laptop that includes an e-ink display on the cover, the world’s first 5G PC in the Yoga 5G, the Duet Chromebook and a new Smart Frame for displaying pictures and more.

Thinkbook Plus
The traditional clam shell laptop design has been around for a long time, and for good reason: it works. Lenovo is having a little fun with the design with the Thinkbook Plus adding an e-ink display to the outside of the laptop and it’s such a simple idea that it’s genius.

The laptop has a traditional 13.3-inch FHD main display inside, but it’s the 10.8-inch e-ink display on the cover that really caught my attention. The e-ink display will let you read, draw with the Lenovo Precision Pen that’s integrated into the laptop, or receive notifications – even when the lid is closed.

In terms of specs, the Thinkbook Plus will include a 10th Gen Intel Core processor, with Windows 10. Engadget managed to find that the laptop will come with either 8GB or 16GB of RAM and your choice of either a 256GB or 512GB SSD.

Lenovo hasn’t announced whether we’ll be seeing the Thinkbook Plus in Australia as yet, but it will be launching in the USA in March 2020, where it will be priced from $1,199 USD.

Yoga 5G
When it comes to laptops, connectivity is everything these days. While Wi-Fi gets you so far, Lenovo is thinking broader by adding in a 5G connection to the Yoga 5G.

At it’s core, the Yoga 5G is an ultra-portable 2-in-1 laptop running Windows 10. The body is made from aluminium and soft touch magnesium and weighs in at just 1.3kg.

The laptop runs on the Qualcomm Snapdragon 8cx 5G Compute Platform with 8GB DDR4 RAM and either a 256GB or 512GB UFS 3.0 storage.

There’s two USB 3.1 Gen 1 USB Type-C ports with PD and DisplayPort support, as well as an audio jack. The 5G can be enabled through either a nano SIM, or if your carrier supports it, e-SIM.

Lenovo Australia hasn’t announced local availability but it will hit the US market in ‘Spring’ starting at $1,499 USD.

The Duet Chromebook is a 2-in-1 design which is essentially a tablet with detachable keyboard. The tablet includes a 10.1-inch IPS display and runs on a MediaTek Helio P60T Octa-Core processor with 4GB RAM and either 64GB or 128GB of on-board storage.

The Chromebook has a largeish battery offering 10 hours of video playback, or 8 hours of web surfing and can be charged via the two USB Type-C 2.0 ports.

There’s no Australian availability information at this stage, but it will be available in the USA from May 2020, starting at $279.99 USD.

The major difference between the Smart Frame and the Smart Clock/Smart Display is the lack of Google Assistant, and any Google services. The Smart Frame instead simply plays videos or shows pictures, but not pictures from Google Photos.

The Smart Frame has a neat trick in that it responds to hand gestures which can be used to control play/pause on a video, or swipe through photos in a slide show.

Again, Lenovo hasn’t announced, when or even IF we’ll see the Smart Frame in Australia. The Lenovo Smart Frame will launch in the USA in August this year where it will be priced from $399 USD.